For the second time in three years, I have been selected by the senior class to be the special guest speaker for the DHS Honor Court Banquet. When I was chosen the first time, I let the seniors in my classes vote on whether or not they wanted me to write a proper speech or to simply “do my thing” (i.e. inspire my students with whatever strikes me in the moment and ramble on tangentially relating it from one topic to the next). Thanks to a narrow victory of the speech option, I didn’t have to wing it. Writing the speech was the right choice at the time because I don’t think I could have trusted myself to just speak from the heart. Two years later, however, is a different story. For the last two weeks since discovering that I would be the speaker, I’ve focused the Sanskrit word satya—truth—during my meditation each day. I created a PowerPoint presentation to keep me sort of on track, but only included a quote or two that I could build an idea upon. The theme for the presentation is based on Randy Pausch’s The Last Lecture, a book I read a few months ago based on the recommendation of a student. Within the pages of the small, sagacious tome the late Pausch details how he used the lessons from his life to give a final lecture to his students at Carnegie-Mellon before his passing. In homage to his lecture, I tried to sum up what I've learned throughout my life thus far and give the DHS graduating class of 2012 the best advice I could.

Overall I felt that it went well, but the perfectionist in me tells me that it could have gone better. The compliments I received from students and parents alike, though, made me happy with the outcome. I only wish my parents could have been there to see it live, as they've never really seen what I do/who I am as a teacher. So I taped it in the hopes of showing it to them and the rest of my family, but several seniors who could not make the banquet (in addition to many of my underclassmen students) asked to see it, which is why I decided to simply post it to YouTube and share it with whoever is interested. Before viewing, however, I should warn you of two technical problems: 1) I didn't realize that by taping in HD the aspect ratio would cut off the top and bottom of the screen with the letterbox, so you can't read the top of the slides; 2) I also didn't know that our camera's default setting stops recording at 29 minutes, thereby losing the last 6 minutes of my talk (it was about 35 minutes long total, which was much longer than I had anticipated). I think you'll get the gist of my overall message without it, but I've also posted the final slide of the presentation after the video. Therefore, without further ado, NIP, I leave you with a visual letter, the bulk of which would be my personal satya… 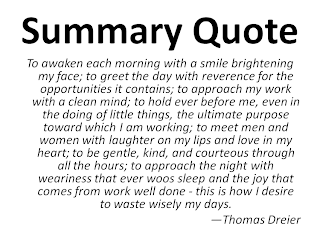 A Note Concerning the Letters

Though each of the letters can be read as an individual piece, it is perhaps best to begin with the first letter and read them sequentially.